As 2014 races to the finish line, I’m pleased to report that Pell Wall has featured as the Best Discovery of 2014 on the much respected Perfume Shrine blog by Elena Vosnaki, who has also just published a fantastic review of Pretty in Pink on the Fragrantica website: not only does she like the perfume, but she writes about it in the most entertaining possible way. 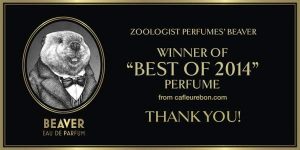 Speaking of Best Discoveries, ÇaFleureBon Editor in Chief Michelyn Camen has voted Zoologist Perfumes (featuring Beaver, created by the Pell Wall Perfumer) as her best discovery of 2014 in their Best of Scent 2014 Awards. And Speaking of Zoologist Perfumes, you can also read an interview of Chris Bartlett on their blog and a review by Steve Johnson of Beaver, also on ÇaFleureBon  in which we are reported to have achieved the impossible (an animalic scent he can wear without cringing).

Better still Beaver was awarded a Best Scent of 2014 award on the very last day of the year!

So, all-in-all not a bad end to 2014.
My sincere thanks go to the reviewers and publishers responsible for these and my best wishes to everyone reading for a wonderful New Year and a happy and prosperous 2015.
Tags:
awards, feedback, perfume, press, reviews
Facebook Twitter Pinterest linkedin Telegram
Newer The Quinolines
Back to list
Older Workshops – February 7th and 8th 2015 – London

END_OF_DOCUMENT_TOKEN_TO_BE_REPLACED

Facebook Twitter Pinterest linkedin Telegram
I’ve been a subscriber to Le Mouchoir Parfumé for some time: the incisive, informed and most importantly short, reviews are just my...

END_OF_DOCUMENT_TOKEN_TO_BE_REPLACED

Facebook Twitter Pinterest linkedin Telegram
Pell Wall’s perfumer Chris Bartlett is featured in an article in Management Today: not an organ of the press most usually associated wi...

END_OF_DOCUMENT_TOKEN_TO_BE_REPLACED

Facebook Twitter Pinterest linkedin Telegram
It’s common knowledge in the industry, but not so common elsewhere, that perfumes are frequently composed by perfumers who are not asso...

END_OF_DOCUMENT_TOKEN_TO_BE_REPLACED

17.00 BST Wednesday 22nd June. All orders received prior to 5th June have been shipped. Due to staff absence, the lab is now CLOSED until Tuesday 28th. We expect significant delays to remain for some weeks. Please don't contact us asking for updates on your order as that adds further delay for everyone. Dismiss

As we remain short-staffed we are processing orders Monday to Thursday. Please check the store notice at the bottom of the page for the current position.