Each entry contains a short list of scent notes with occasionally other short commentary to assist those who may not have encountered the material previously to decide whether it is of interest: I recommend you make your own assessment of each and every perfumery material you use however.

After pricing, quantity options and other basic details scroll down for narative descriptions: these are intended to assit interested readers as well as potential purchasers to assess the uses and potential of the material in question.

Many of the descriptions contain quotations from the manufacturer of the product and in addition I have quoted fairly extensively from Arctander[1] and from Arcadi Boix Camps[2] – both independent writers and both highly experienced perfumers.

There are also some quotes from Bedoukian[3] where details of the chemistry of a material are significant and from Scent & Chemistry[4] the authors of which have taken an analytical approach to the art of perfumery that is unusual and very useful. Quotations have been included from the extremely useful teaching books by Calkin & Jellinek[5] and Curtis & Williams[6] and Surburg and Panten [7] as well.

Anything not identified as a quotation is my own opinion of the material in question and it’s uses, but I am grateful to many other sources and perfumers as well as the expert authors named here.

[2] Arcadi Boix Camps: quotations are taken from Perfumery: Techniques in Evolution, 2nd Edition published in 2009, but containing material written in 1978, 1985, and 1999 as well – where relevant the date of writing is noted with the quotations.

[4] Scent & Chemistry by Ohloff, Pickenhagen and Kraft, published as a book of that name in 2012, from which I have quoted, but also referencing updates on their maintained Facebook page . In addition this tag is used in the descriptions for other works involving the same authors, including:

[6] Curtis & Williams: quotations are taken from An Introduction to Perfumery 2nd Edition, by Tony Curtis and David G Williams, published in 2001

A quick note about spellings: this website is primarily written in British English – it is after all written by an English Perfumer – however most of the authors mentioned here and many of the manufacturers were writing for American audiences and published using American English: where that is the case I have, as far as possible, preserved the spelling used in the source material.  As a result there may be inconsistencies on any given page, but that seemed to me better than arbitrarily changing material in the process of quotation.

Bottles of Ingredients by Pell Wall in various sizes

We’ve recently had a change of policy – and bought some new containers – so now the majority of ingredients are sold by weight whether they are solids or liquids.  Only the 10ml and 5ml sizes, and a few inexpensive materials such as solvents, are still done by volume.  Even the 5ml and 10ml size will be 5g or 10g if the material comes as crystals or powder – melted solids, like liquids, are done by volume in these small sizes.

Liquids up to 10ml in glass bottles, 30g and 50g in in stoppered and capped lacquered aluminium bottles.

Calone in a 100g aluminium flask by Pell Wall 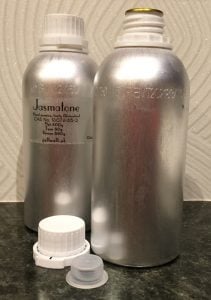 100g, 200g and 500g of liquid (and materials that are solid but normally melted for use) will come in a 125ml, 275ml or 625ml capacity, double sealed, lacquered aluminium flask with a tamper evident closure.

These containers are ideal for long-term storage of perfumery materials.

Most powders and crystals will come in a plastic container, regardless of the amount you buy, a few in glass, where that’s necessary.

100g of Ethyl Maltol crystals as supplied by Pell Wall

An exception is a few cheaper materials such as solvents, where these sizes indicate a 100ml or half litre plastic bottle – a note to this effect will appear when the size is selected if applicable.

Those materials available in 1Kg are normally supplied in aluminium flasks similar to those used for the 500g size.

Finally please note that, with some 500 different materials and so many size options we don’t hold ready-to-sell stocks: when you buy perfumery ingredients we will prepare them to order for you.  This means that large orders can sometimes take a few days to prepare and also that we don’t offer refunds on ingredients, unless of course there is a fault of some kind.

15:00 GMT Thursday 4th March: All orders have been shipped. Dismiss