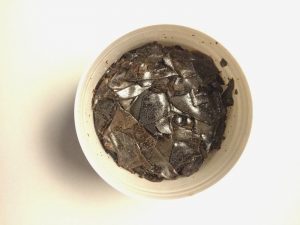 Tolu Balsam is a very useful natural fixative as well as a lovely base-note in its own right, but it isn’t the easiest of materials to handle.  It comes from the South American tree Myroxylon balsamum.

It is used to fix materials such as juniper, petitgrain, spices and florals of many kinds and frequently forms a key component of oriental and chypre styles of perfume.

Arctander describes it as: “a brown, orange-brown or dark yellowish brown mass, brittle when cold, and the fracture is glasslike or flintlike. Its odor is sweet-balsamic, cinnamic in type, faintly floral and with an undertone of vanillin.” and at normal UK temperatures it’s certainly rock-hard and behaves rather like a chunk of Brighton Rock when it’s broken. 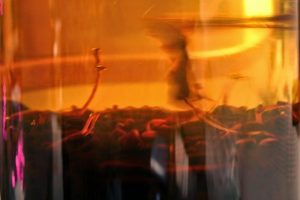 So to make it practical to handle it needs to be diluted in a suitable solvent – it’s often sold already diluted in this way though the dilution isn’t always declared nor the solvent named – I bought a pure Kg recently and diluted it ready for use in TEC (tri-ethyl citrate) in a process that turned out to be both quite involved and to produce some fun images, so I thought I’d write it up here.

The first job was to get the Kg of rock-like Tolu Balsam soft enough to pour out of its container, which I did by sitting the container in a bain-marie and boiling the water beneath it: this took a few hours before the material was fully liquid.  Meanwhile a pre-weighed out amount of TEC was heated on my heater-stirrer with a stirring bar already in the bottom of it (if you don’t heat the solvent as well the tolu will go hard again as soon as it hits the cool liquid and takes much longer to go into solution).

The next step is to pour the hot, liquid tolu into the pre-warmed solvent (insulated gloves are called for for this step of course).  At this point we realised that there was a photo opportunity as the resulting non-yet-mixture looked like an alien landscape.  The tolu settled to the bottom of the solvent and the application of glass rods was necessary to get it to start dissolving as it was much too sticky for the automatic stirrer at that stage: as those went in it started to look like one of those scenes from the Alien series where the creatures start unfolding from the cave walls . . .

This is all being done in a three litre glass beaker and as you can see in the later pictures the manual stirring took some time before we could leave the automatic stirrer to get on with the job on its own and the balsam tended to dry on the glass very quickly too. 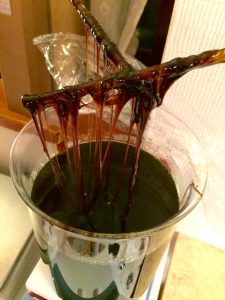 The cling film you can see was to minimise loss of aromatic quality as this was all being done hot, although with such a high-boiling material and high-boiling solvent that isn’t a big concern.

Eventually it reached the stage where it was liquid enough for the automatic stirrer to do its stuff and with the stirrer on a low setting it was left overnight to complete the mixing, kept at a constant 60 degrees centigrade by the integral heater.  By morning it was fully mixed to form a dark brown, consistent, mobile liquid and here you can see me concentrating hard as I pour it into a (slightly pre-warmed) 3Kg glass reagent bottle.

The bottle is on the scale so that I can check the amount that’s gone into it for stock control purposes.

We even captured a little video of that part of the process, which gives you a clear idea of the consistency once it’s finished.

A few chips and flakes were left over from the mixing process and these were put into a plastic jar  – the picture at the top of this post is of those, a few weeks later by which time they have merged together to form a single solid but uneven lump, much like that with which the whole process started. 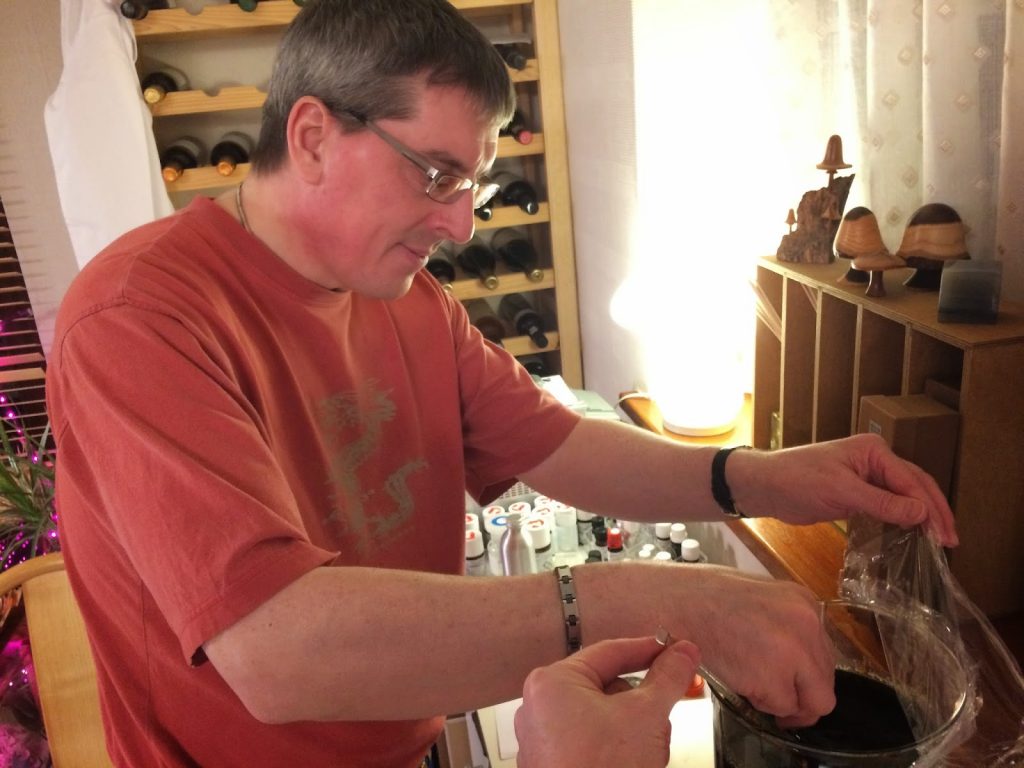 Facebook Twitter Pinterest linkedin Telegram
Amazingly it was four years ago that I posted about then new research demonstrating that the sandalwood odourant known as Sandalore (a ...

END_OF_DOCUMENT_TOKEN_TO_BE_REPLACED

Facebook Twitter Pinterest linkedin Telegram
Vanilla is one of the most useful ingredients in cooking, cocktails and perfumery.  Its story is quite well known, so I’m only going to...

END_OF_DOCUMENT_TOKEN_TO_BE_REPLACED

18.00 GMT Thursday 20th January: All orders received prior to 18th have been shipped. The Lab is CLOSED tomorrow and over the weekend so processing will resume on Monday 24th. Dismiss