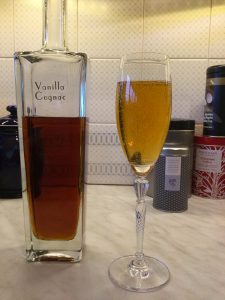 Vanilla is one of the most useful ingredients in cooking, cocktails and perfumery.  Its story is quite well known, so I’m only going to touch on some of the less well-known aspects here.  My main purpose is to give details of a fine drink and a tincture that are easy to make at home.

So, first up, the drink: once upon a time, when I had more money and less sense I conducted a research project into the Champagne Cocktail – a hedonist’s research project rather than an academic one – I tried variations on the Champagne cocktail in every bar I could find that served one to try out the differences.  Much was learned and more was drunk … including me from time to time. 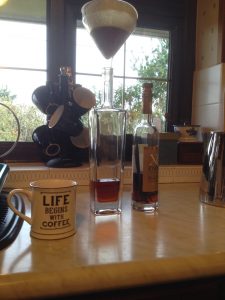 Filtering the cognac
(while drinking coffee)

One of the things I discovered was a variation called the Vanilla Classic – sadly now both the bar where I found it and the key ingredient are gone.  That ingredient was Navan – a fantastic vanilla Cognac made by the same people who produce Grand Marnier.

So why am I telling you about a drink you can’t buy? Well, it inspired me to have a go at my own and I’d like to share the process with you:

Take one bottle of good (XO ideally) supermarket cognac and put in two pods of Ugandan Vanilla – leave it where you’ll remember to shake it now and then for about four months.
Take out the pods, filter the cognac but reserve the pods (you’ll see why in a bit). 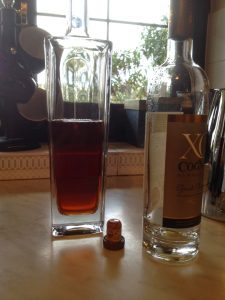 Your Cognac should now be a beautiful mahogany colour and filled with complex vanilla flavours as well as all the richness of the fine brandy itself.  You can drink it just as it is, add sugar to make something that more closely resembles Navan but I think it works fantastically used to upgrade a glass of Prosecco – which has enough sweetness of its own to sustain the extra alcohol – drink and enjoy! 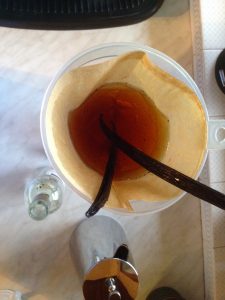 Now back to those pods: it seems a shame to let them go to waste and one of the lesser-known facts about vanilla is that in perfumery the absolute (see this post for a definition of absolutes and other extracts) is normally used but it isn’t easy to work with, so for the small-scale perfumer a tincture is an alternative.
Here’s my technique for a tincture that’s a bit out of the ordinary:
Let the pods from your cognac-making dry out then chop them up, along with another fresh pod or two, weigh them all together and put the whole lot into nine times the weight of perfumers alcohol (so as to create a 10% Tincture), adding a shot or two of the cognac to the blend (I used about 50g).  Just as with the cognac, wait for at least four months shaking whenever you think of it but at least every few days.
Result: vanilla cognac you can drink plus a vanilla tincture that you can use in perfume making at about 7 times the quantity you would the pure absolute.  The cognac in the tincture gives it an extra complexity and also encourages more flavour out of the pods due to the water content – unlike many materials vanilla tinctures better in a lower strength alcohol
Resist the temptation to drink the tincture though …
Tags:
cocktails, ingredient, natural, Vanilla
Facebook Twitter Pinterest linkedin Telegram
Newer Anjin Reviews
Back to list
Older Tolu Balsam

Facebook Twitter Pinterest linkedin Telegram
Amazingly it was four years ago that I posted about then new research demonstrating that the sandalwood odourant known as Sandalore (a ...

END_OF_DOCUMENT_TOKEN_TO_BE_REPLACED

Facebook Twitter Pinterest linkedin Telegram
It’s been a while since I posted and I thought it was high time I did.  As this weekend is World Gin Day and, is a week before, Fat...

END_OF_DOCUMENT_TOKEN_TO_BE_REPLACED

Facebook Twitter Pinterest linkedin Telegram
Tolu Balsam is a very useful natural fixative as well as a lovely base-note in its own right, but it isn’t the easiest of materials to ...

END_OF_DOCUMENT_TOKEN_TO_BE_REPLACED

Facebook Twitter Pinterest linkedin Telegram
And now for something completely different: It’s an experiment I've been meaning to do for a while: a martini-style drink using a co...

END_OF_DOCUMENT_TOKEN_TO_BE_REPLACED

16.00 GMT Tuesday 24/05/2022: All orders received prior to 22nd May have been shipped or will be collected tomorrow. The Lab is OPEN tomorrow, so processing will continue then. Dismiss

As we remain short-staffed we are processing orders Monday to Thursday and aim for a two day turnaround.