Pretty in Pink
Back to products
Next product

Inspired by the character in James Clavell’s Shogun.   Citrus, spices and precious woods come together to make a lasting, special unisex fragrance with warmth and depth from sandalwood & styrax.  Sophistication and subtle strength

Designed to last the whole night through and into morning, this is a spicy, vigorous fragrance with plenty of complexity to hold your interest.

Sitting above the sandalwood are bright notes of pimento, coriander and clove with subtle floral undertones to add intrigue. 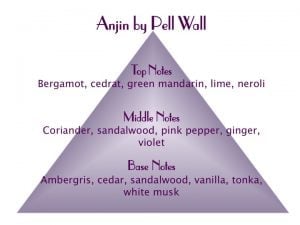 Clavell’s Anjin (the name comes from the Japanese word for pilot or navigator) is marooned in 16th century Japan when his ship is lost there.  He starts out rather brash and his treatment is initially brutal, but he adjusts and ultimately is at one with his sophisticated hosts.  This fragrance seeks to tell a similar story of increasing sophistication.

A fine fragrance to accompany you on an elegant night out and equally at home on man or woman.

16.00 GMT Tuesday 24/05/2022: All orders received prior to 22nd May have been shipped or will be collected tomorrow. The Lab is OPEN tomorrow, so processing will continue then. Dismiss

As we remain short-staffed we are processing orders Monday to Thursday and aim for a two day turnaround.